Veterans Honored by Students and Staff 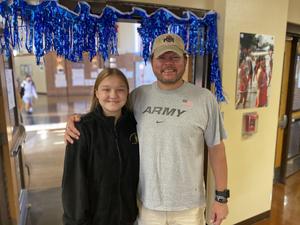 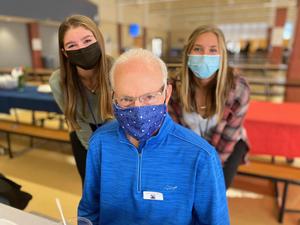 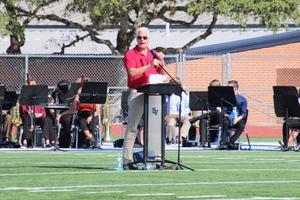 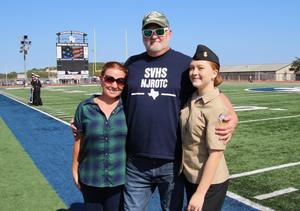 It has become a tradition that students, teachers and the community look forward to every year - Veterans Day. Normally, celebrations occur on every Comal ISD campus, and while this year's celebrations were altered a bit, they still brought the community together to remember those who fought for our freedom.

Nov. 16, 2020 - Veterans Day is a big deal at Comal ISD which has a history and tradition of honoring and celebrating those within its community who served the United States in the armed forces. The tradition continued this year across the district’s 589 square miles with virtual videos and safe outdoor celebrations.

Military veterans were treated to programs that honored their service with student performances by JROTCs, dance teams, student councils, choirs, orchestras and more.

While many of the veterans honored throughout the day were family members of students, some were community members proud to be a part of the tradition. Here are just a few veterans who took part in Smithson Valley High School’s program.

Dewey Biscotto, 71, served in the United States Army from 1972 to 1980 and retired as a captain from the Reserves in 1980. A friend in his neighborhood invited him to attend the SVHS Veterans Day celebration which honors all veterans in the community with a brunch and outdoor program.

“This is very appreciated,” Biscotto said. “It is nice to be recognized for what you’ve done.”

James “Jim” Meade served in the United States Army from 1989 to 2020, retiring as a sergeant major. After completing two tours of duty in Kuwait and Afghanistan, he and his wife chose to retire in San Antonio and live within Comal ISD. This was his first Veterans Day celebration, and he was impressed from the moment he arrived when he was greeted by member of the SVHS JROTC.

Meade has two children who attend Comal ISD campuses including Riley, a ninth-grade student at SVHS, and Briannah, a second-grade student at Kinder Ranch Elementary. Riley was happy to have her dad be a part of the program at her school.

“It’s exciting because he was always at work or deployed for so long,” Riley said. “He didn’t get to go to my school events.”

Retired Commander Scott Snow served in the United States Navy from 1986 to 2010 with six deployments. He was this year’s guest speaker at the SVHS ceremony.

“Programs like this build the community and make it stronger,” Snow said. “It integrates the older generation with the younger one giving them an opportunity to share and impart lessons and wisdom to the next generation.”

He shared a few lessons that his years of service taught him including the importance of “giving respect to get respect” and “living a life of trust, honor and integrity and applying that to everything you do.”

Snow has a daughter, Merit Snow, who is a second-grade student at Rahe Bulverde Elementary, and two older children, Logan and Laurel.

Ric Akers retired from the United States Air Force in 1989 as a sergeant, and this was his first Veterans Day celebration at SVHS.

“I’ve lived a lot of places,” he said, “and most do not celebrate like this. It’s great to see a community do this for its veterans, and it’s great to be a part of it.”

“It’s really nice that we get to honor the people who served in the military,” said Addison, who plans to serve as well. “I’m happy to get to honor my Dad and everyone else.”