Board of Trustees Recognizes Students for Excellence in Volleyball, SkillsUSA, Ag Issues 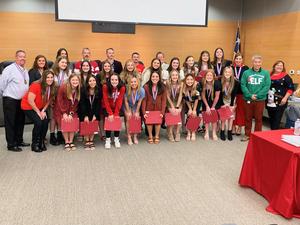 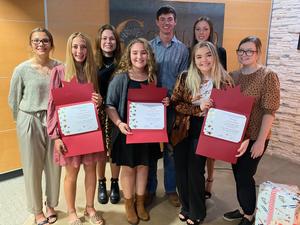 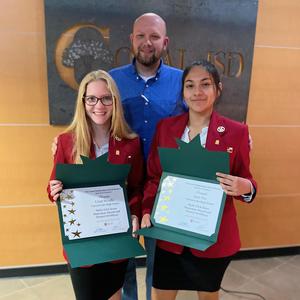 During its regular board meeting, the Comal ISD Board of Trustees recognized students who competed at the state level in sport and leader development organizations.

The CHS Volleyball team made school history this season with a record of 40 wins in a single season. The Cougarettes ended the year third in the state and the Texas 5A Region 4 Champions. This was the school’s 12th appearance in the state tournament.

Fontenot, Hawkins and Malone received All-State Honors. Malone also made the All-Legacy Team, and Pope was invited to play in the All-Star game in July.

Another CHS team was recognized for qualifying for state competition. The Agriculture Issues Forum Team competed in the Texas FFA State Leadership Development Event Finals in early December and placed 10th out of 120 teams from across the state.

In addition to state qualifiers, two students from Canyon Lake High School were recognized for their success in SkillsUSA Texas. As District 10 officers, Jade Paz and Lilah Windle were eligible to attend the SkillsUSA Texas Summer Leadership Conference and received the highest honor in SkillsUSA Texas – the Texas Statesman Award. Their adviser and teacher, Michael Tokarski, also received this award.

-Members of the Canyon High School Volleyball Team were recognized for the team’s winning season during the December Comal ISD Board of Trustees meeting.