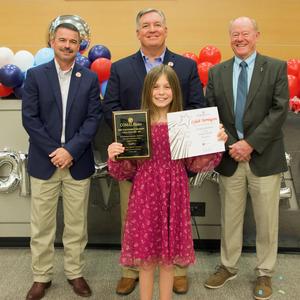 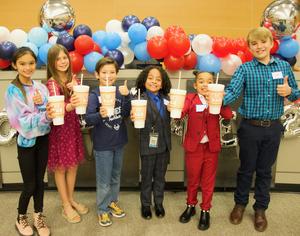 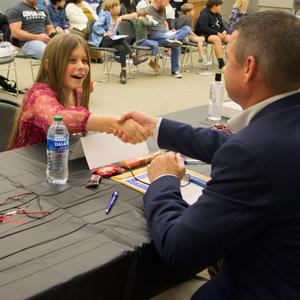 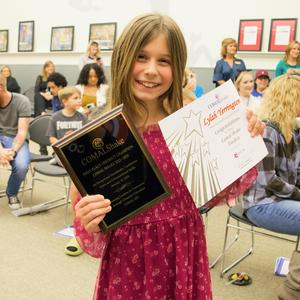 A natural-born conversationalist, 10-year-old Lylah Yerrington was named the 2023 Comal Shake champion after the final round of the annual competition which encourages elementary students to hone their interpersonal skills.

Lylah Yerrington, 10, was crowned the champion after advancing from her campus to the semifinals and then to the final round on Friday at the district’s Support Services office.

For the ninth year in a row, the district hosted the Comal Shake competition to encourage elementary students to hone their interpersonal skills, specifically, starting conversations, showing confidence and shaking hands.

It turns out that Yerrington is a natural conversationalist who made it to the final round last year and couldn’t wait to try her hand at it again.

“I love talking to people,” Yerrington says. “I love making them laugh and just interacting with others. Last year, I was the youngest finalist, and while I didn’t win, it felt like I won inside.

“I had this amazing feeling like I had something special, and I wanted to do it again. It has built my confidence and my personality.”

The champion has three go-to conversation starters: using the season or time of year to ask a question like, ‘How was your December?’; asking about hobbies; and asking about pets such as, ‘Do you have any dogs?’

The Comal Shake competition begins at the campus level with every Comal ISD elementary campus selecting two representatives to compete in the semifinals. The top six out of the 32 advance from the semifinals to the championship round.

The six finalists are given two minutes with each of three judges to showcase their interpersonal skills.

-This year’s Comal Shake champion, Lylah Yerrington, is pictured here with this year’s three judges for the final round. Standing in back from left is Comal ISD Board of Trustees President Jason York, Superintendent Dr. John E. Chapman III and New Braunfels Mayor Rusty Brockman.